I’m not a fan of Austin’s impervious cover regulations. To me the obvious way to reduce pollution and keep impervious cover on a macro scale is to reduce sprawl. The best thing the City could do to to mitigate water pollution right now is stop all greenfield development outside of the current developed area and leave it to nature.

For various reasons, that will never happen. People like single family homes, and they want to be able to buy new ones. It would also maybe drive housing prices up even more, but also maybe not if it were paired with a loosening of development laws inside the city limits. As crazy as it sounds, the State of Oregon actually sets an Urban Growth Boundary for every municipality in the state including Portland. You can see the urban growth boundary in some places as you’re driving out of the city - single family suburbia will end abruptly and turn into farmland or state parks. The growth boundaries are somewhat contentious as it restrains developers and landowners and possibly increases housing prices (although I don’t know if that’s been shown as significant by any studies), but so far they have held up politically. Again, Austin could do this, but it’s very unlikely.

So, we are left with Austin’s current regulations that attempt to maintain some of the benefits of natural world in an urban area by imposing maximum impervious cover regulations through zoning. In short, “impervious cover” refers to anything that won’t absorb rainwater like roads, buildings, and parking lots. Austin sets a maximum percentage of impervious cover for any piece of zoned land, meaning that you cannot build housing

However, if you look at the impervious cover regulations for each zone in city’s zoning guide, it quickly becomes apparent that the regulations really only apply to housing and not businesses. The absolute densest residential development, MF-6, only allows 80% of the lot to be impervious cover, meaning that developers of an apartment building have to devote 20% of their land to grass that no one will ever use instead of building more housing: 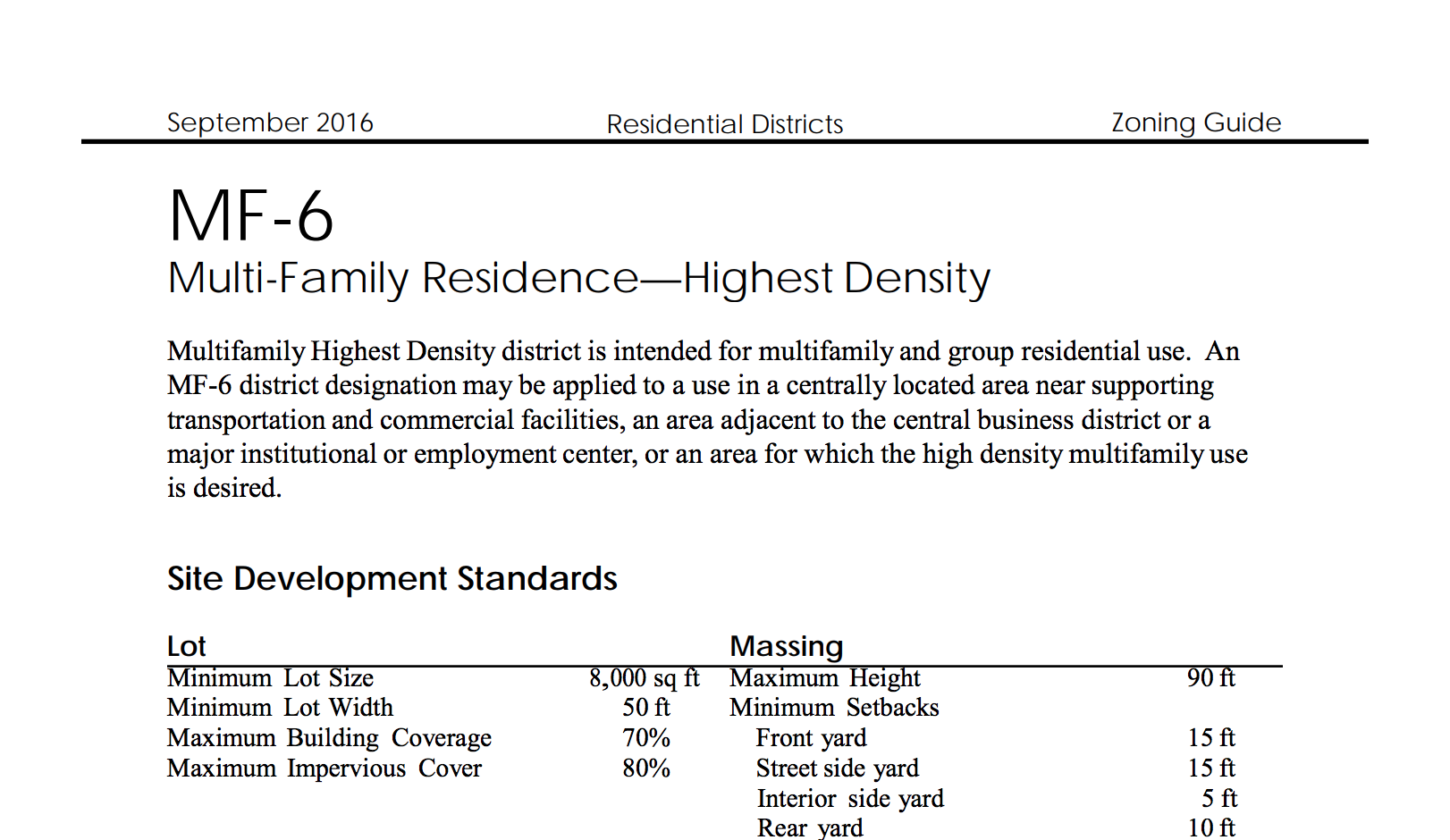 20% may not seem like a big imposition, but the lost revenue from more housing is probably enough to stop would-be housing developers to not take a risk on developing a multifamily property.

The impervious cover laws for other zones are even more insane. The regulations for SF-6, what the city describes as “Townhouse and Condominiums”, allows only 55% impervious cover and 40% of the lot to be taken up by a building: 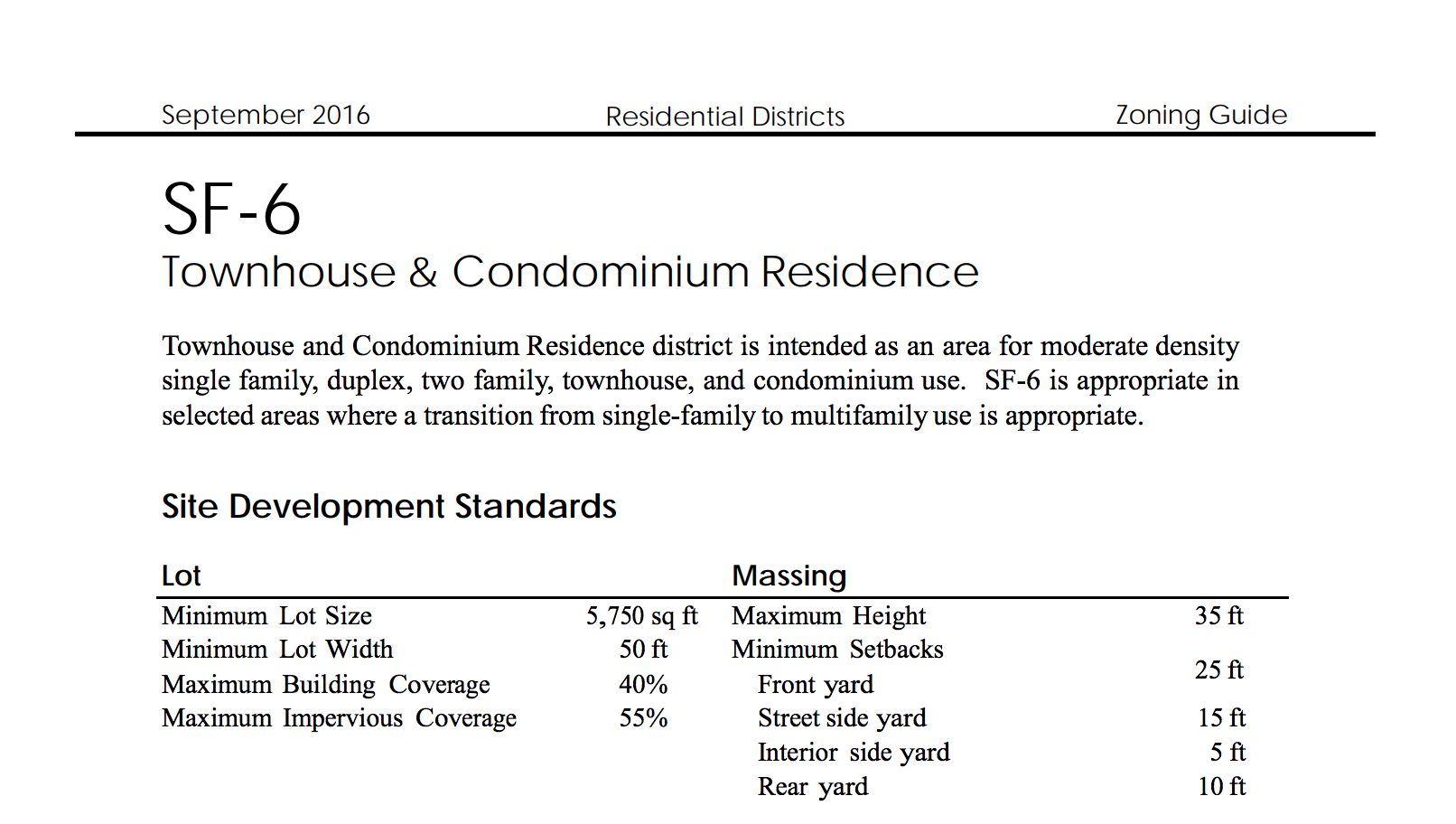 This means that if you own a lot that happens to be zoned SF-6, you have to do nothing with nearly half of your land by law. And realistically in Austin, that land is going to be grass lawns, which will need to use the region’s scarce water to stay green. Not exactly a win for the environment. 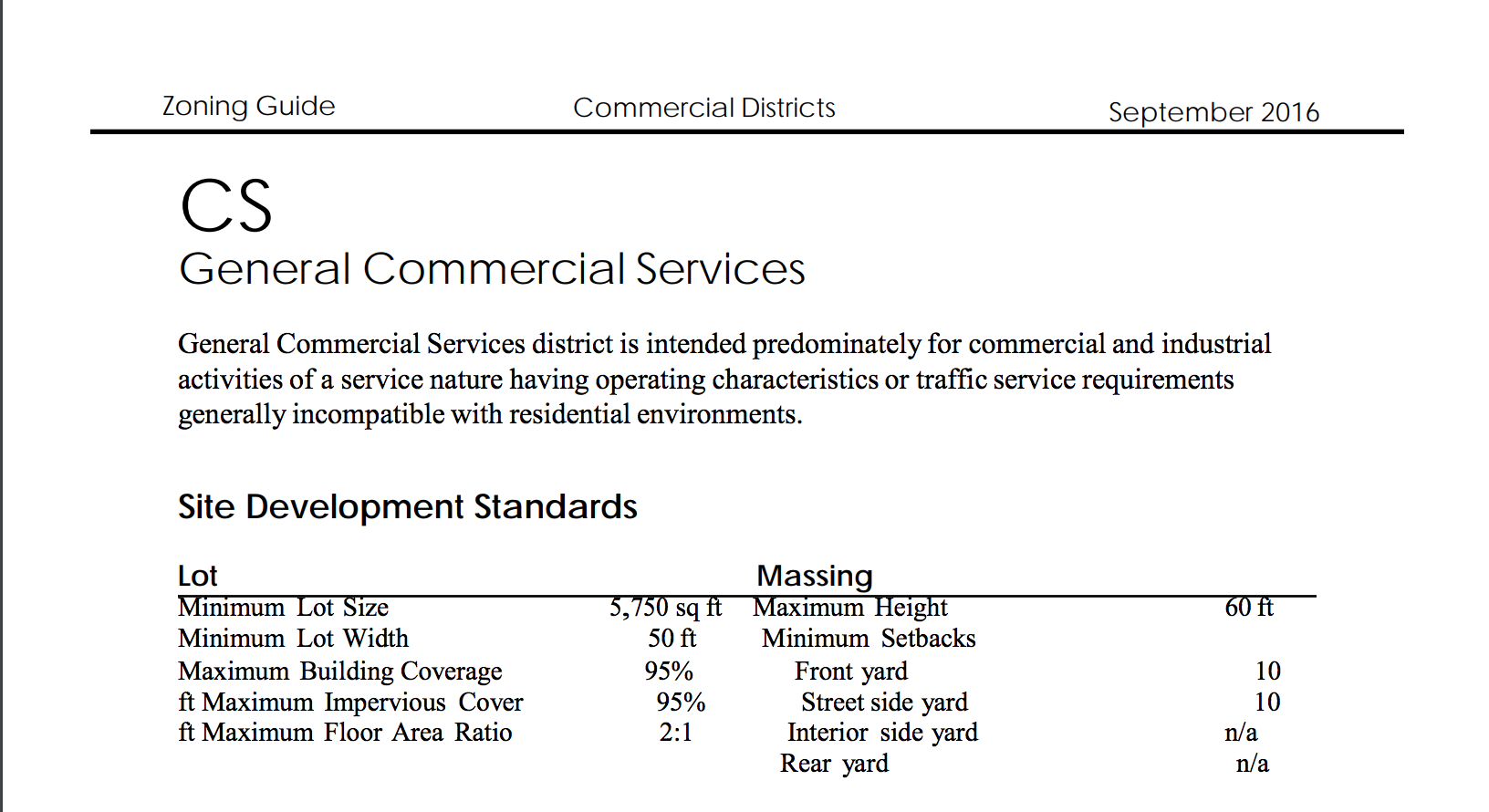 So what should be made of this and what are the consequences? The first thing is that it guides the building practices you see across basically the entire city: every house must have a lawn, and many of them are massive even in central neighborhoods (shoutout to the 12,000 sq foot lot in Allandale). Businesses, on the other hand, can pave over massive swaths of land with basically no mitigation. Impervious cover has been one of the many complaints by neighbors about the Grove at Shoal Creek development, which will add much needed housing to Central Austin, but meanwhile nearby businesses on Burnet Road like HEB or even Burnet Road Self Storage have no obligation or incentive to not pave over as much of their land as possible.

As I said at the beginning, I think Austin’s impervious cover regulations are actually fighting a battle that will never be won. Rather than trying to maintain natural ecology in our urban areas, we would be doing much more for the environment by limiting the spread of urban (or suburban) areas entirely. Most of New York City is concrete, and even calling the beautiful parks like Central Park and Prospect Park “nature” would be a stretch. But the average New York City resident’s lifestyle is much, much better for both the water and air than the average Austinite, and it’s almost entirely due to a) living in multifamily housing where heating and cooling is shared, and b) not driving cars.

If Austin does keep the impervious cover regulations, businesses should be required to participate too. One option common in Portland is streetside bioswales, which are basically normal gardens that are intentionally planted with plants that will help filter pollutants from runoff. They have generally been successful, and have even helped the City avoid replacing expensive sewer infrastructure for controlling runoff. You can see them here around a grocery store in the Hawthorne neighborhood in Central Portland:

Bioswales at Fred Meyer grocery store on Hawthorne in Portland

In typical Austin fashion, the city’s impervious cover regulations are probably well intentioned but are ill-suited to the large city Austin has become. Austin is no longer a town of single family homes where land is cheap. Devoting large portions of land in the Central City to grass or rocks contributes to the city’s affordability crisis, and the city should look at changing how this issue is approached entirely.