Self driving cars are a hot topic these days. They are especially intriguing to Austinites who are fed up with the city’s traffic, and who have possibly seen Google testing their self driving cars on the city streets.

One essay that’s gotten a lot of attention is by Lyft’s CEO John Zimmer on Medium in which he boldly predicts that “By 2025, private car ownership will all-but end in major U.S. cities”. There is a lot to agree with in his post. He addresses the effects that building for cars has had on cities like leveling housing for highways, and building for cars instead of pedestrians or cyclists. He suggests that autonomous cars will lead to a change in the built environment in our cities, something that most urbanists are probably looking forward to.

The only factual issue I would point out is that his timelines are probably optimistic, and some prominent transportation engineers have suggested that “the hype around self driving cars has gotten totally out of sync with reality.” That said, it’s very likely that the technology for self driving cars will be at least somewhat widespread in the next 20 years.

So let’s examine the future Zimmer describes. He paints a very rosy picture, and I hope it’s one that comes to fruition. But there are a few things to keep in mind when reading an optimistic post about the future from the CEO of a multimillion dollar company:

Lots of people have private cars, and they are not going to give them up for free. If private car ownership is truly going to end before those cars are literally falling apart, the government is going to have to pay them to get off the road. Maybe that will be worth it for the safety benefits of self driving cars, but maybe it won’t. Again, the technology isn’t ready yet, so counting on an ideal future with perfect technology to save us is misguided. Lyft and other ridesharing companies operate on public roads. Relying on them to handle any significant portion of a city’s transportation needs means that the city is constructing transportation infrastructure and letting private companies profit from operating vehicles on that infrastructure. This is not unheard of. The UK privatized it’s rail infrastructure in the 1990’s and the results are best described as mixed. Whether privatization worked a continual debate in British politics, with debates lining up along predictable lines: leftist parties want public ownership to return, conservative parties say privatization worked. There are also possible similarities to how airlines operate in the United States. But the fact remains that private companies will be profiting off of the use of public infrastructure. Related to the point above, most public transit agencies currently operate at a loss. They don’t make a profit, and public transit riders are generally lower income than the population as a whole (.pdf warning). Bus riders are even more so. Switching to a system in which privately operated autonomous ridesharing companies provide a large portion of a city’s transportation means relying on those companies to operate more efficiently and extract a profit while maintaining lower prices than a public transit agency could. Perhaps most importantly, autonomous cars don’t solve traffic. Yes, they will someday be better drivers than humans, so the parts of traffic that attributable to human error could someday be solved. But self driving cars are unlikely to be perfect any time soon: any software developer will admit that bug free software is basically unheard of. So, we’re left with a situation in which we may have just as many cars on the road at rush hour as before, and as this great post from Jarret Walker shows, the problem with cars is space: 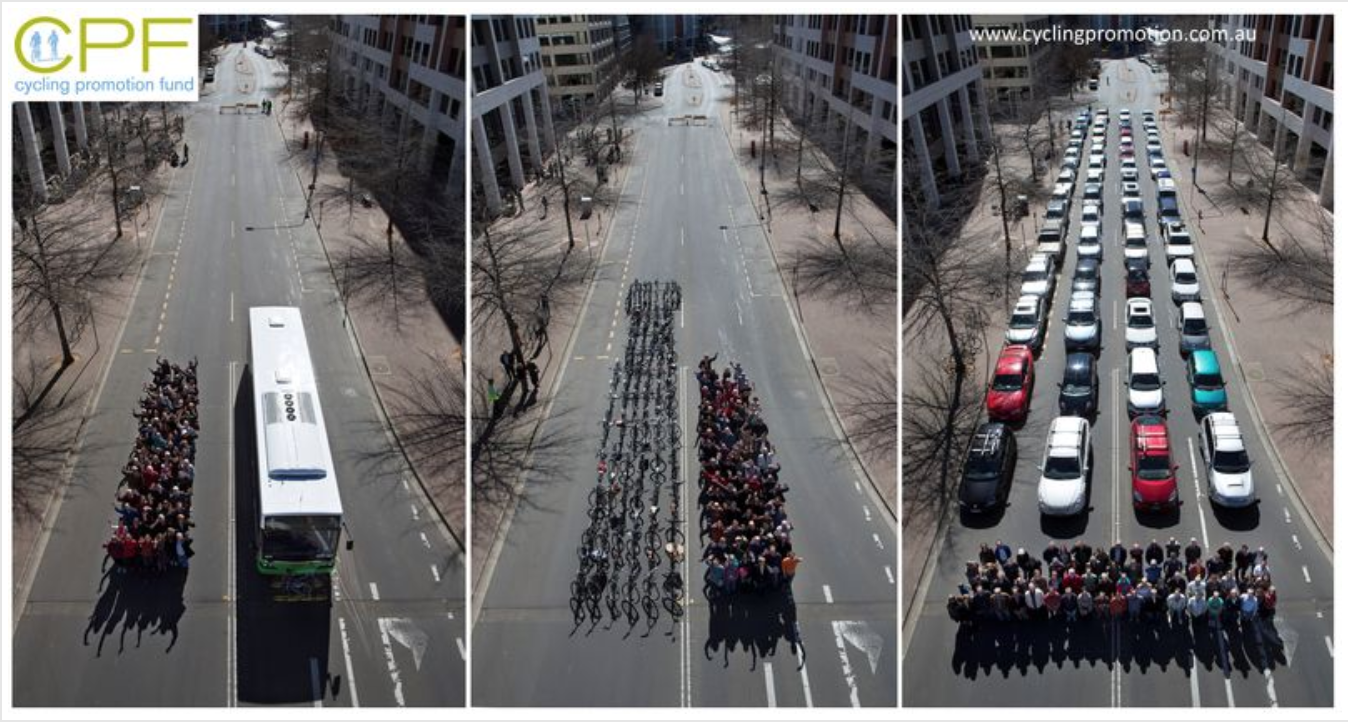 Cars take up a ton of space. They do not fit in walkable, bikeable cities, and even in a world of all autonomous cars, that will still be true. If your answer to the issue of space is “autonomous buses” then great! That’s my answer too. Uber has already recognized the benefits of shared, fixed route transportation as it’s started testing smart routes in San Francisco. As Jack Smith pointed out on Twitter, Uber’s smart routes sound a lot like a bus route: screen-shot-2016-09-20-at-10-02-47-pm

There’s another technology that runs on fixed routes, and the autonomous technology has already been perfected: rail. Vancouver, BC has a rail system that carries nearly 400,000 people per day in trains that are fully automated.

My point here is that the arrival of autonomous vehicles is going to be complex. In Austin’s case, many people seem to pin their hopes for solving traffic on driverless car technology, but the specifics of how exactly that will work are often lacking. Again, it’s worth noting that driverless car technology is being developed by private companies for profit, while public transportation agencies are currently run for public benefit. I’m going to say this over and over on this blog, but public transportation is a form of redistribution of wealth right now. Changing that will be a significant change working against public transit riders, who are overwhelmingly low income in a place like Austin. It’s easy to get lost in a vision of the future in which you have a coffee and read the morning news on your smartphone while getting shuttled to work in a comfortable private autonomous vehicle, but that vision will likely never be a reality for a large slice of the population. That vision will not be cheap.

I hope driverless cars come soon, and I hope they save some of the thousands of lives that cars take every year. I also hope that they aren’t used as an opportunity to eliminate public transportation. Because that vision of coffee and the reading the news on your way to work? Plenty of public transportation riders are already living it. It’s called the bus (or train).