I wanted to express my disappointment with what I have read about the Project Connect 2.0 presentation for Friends of Hyde Park on November 15th. Austin resident Mike Dahmus was at the meeting and wrote extensively on his takeaways. His perception was the top priorities of Capital Metro do not include investment in high capacity transit on the Guadalupe/Lamar corridor, which is nearly universal preference of transportation advocates in Austin. I would be very interested to know if Capital Metro acknowledges the strong support of transit advocates for High Capacity Transit on the Guadalupe/Lamar corridor. If your agency does acknowledge that support, you should address why we are being ignored.

The alternative priorities presented were also deeply disappointing. Among them were Bus Rapid Transit on I-35, which I’m somewhat appalled to hear. Interstates are not transit friendly, and Austin should not be investing money in high capacity transit on interstates. End of story. This is really common sense, but it’s also backed up by plenty of data. I would urge you to take a look at a map of Austin on walkscore.com and observe the areas of Austin that are most walkable and therefore the most transit friendly. I’ll also embed an image here: 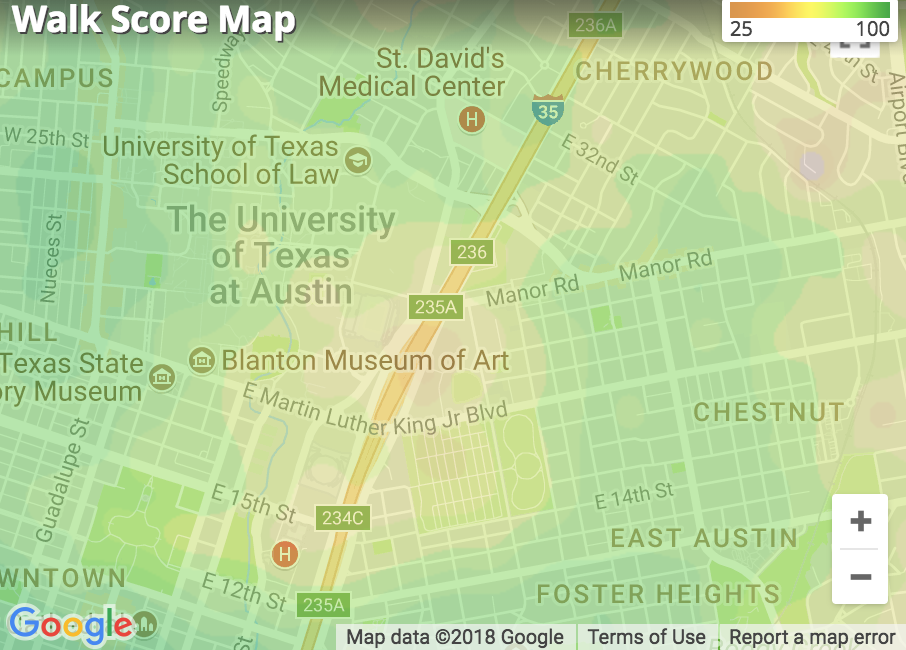 Notice that I-35 is a barrier to walkability. Walking from Cherrywood to UT is difficult and unpleasant because of I-35. You are proposing spending transportation dollars on a corridor that people actively dislike. You are transporting people along a corridor where there is nowhere to go. Is the expectation honestly that people exit one bus surrounded by 60+mph traffic, and stand nearby the 60mph traffic to wait for a second bus to get to their destination? That is an absolute fantasy and in the entire country no current highway running BRT systems that serve as successful examples. Mike Dahmus’ post includes a slide from a proposed BRT line in Minneapolis that does not yet exist. It is beyond me why Capital Metro would look at fictitious examples of transit in order to guide policy for a major city.

There are plenty of examples of successful transit projects. Houston’s light rail was built along the city’s busiest corridor, and ridership has been well beyond expectations. Houston’s light rail is built along the city’s busiest corridors, and those corridors were busy before there was rail, just like Guadalupe and Lamar are now. Houston also has a network of frequent buses connecting to that rail system, and their ridership is growing quickly while Capital Metro’s is falling precipitously.

Austin does not need to reinvent the wheel. Building good transit is simple: build it where people and businesses are. There are no people and businesses along I-35 that are friendly to transit riders, and there will never be. You are literally asking people to use transit in one of the most unpleasant and least accessible places in Austin: the middle of an interstate. It will be a disaster.